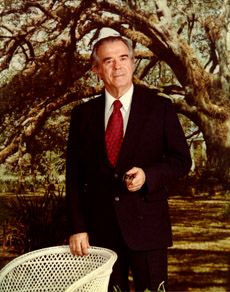 [The following essay was written in the third person by Mr. Noel during the 1970s.]

James S. Noel was born in Shreveport on October 30, 1912 in the house at 537 Herndon which has recently been moved and restored at a location on Ockley drive just down a little way from First Baptist Church. The Noel family has played an important part in the growth and development of Shreveport and Caddo Parish from the early part of the last century, highlighted by the building of the Noel Memorial Church in the first decade of this century, and the establishment by Mr. Noel of the Noel Foundation Library—a collection numbering approximately 200,000 volumes—the culmination of a lifetime of book collecting and a lifelong dream of building a library for scholars—a dream which may in the future be more fully realized than even Mr. Noel anticipated.

Mr. Noel is a graduate of Centenary College, where he came under the influence of such fine teachers as Dr. Bryant Davidson and Dean R. E. Smith, among others, and attended graduate school at the University of Oklahoma, where he began work on a doctoral dissertation on Shakespeare’s Henry V. He taught English in Caddo Parish for ten years, interrupted by military service in Europe during World War II, and turned to the business world in 1951 as President of Noel Estate, Inc., which he saved from loss and successfully developed single-handedly, along with numerous other business activities throughout the years, including a shopping center, a motel, an office center, and other corporations. 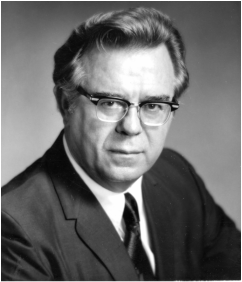 passport photo, 1960
Although Shreveport has been his lifelong home, Mr. Noel has traveled widely, including his military assignments in Scotland, England, France, and Germany, short residences in New York and California, and numerous other travels, some of which were occasioned by such notable accomplishments as state and local championships in chess, wrestling, and handball. Always athletically inclined, Mr. Noel seemed to excel in whatever sports he chose, from swimming, tennis, basketball and gymnastics to roller skating. From a skinny little boy at Alexander Elementary school, he worked and persevered until he built himself up into one of the finest all-around athletes Shreveport has ever had. I can tell you, though he would not, that he was once spoken of by a fellow athlete as the strongest man in Shreveport.

Mr. Noel’s athletic interests have been paralleled and even superceded by his interest in learning. An avid reader from childhood, he read all the usual boyhood favorites, but by his late teens he had become a true student—and continued daily to cultivate and assuage his desire for knowledge with unwavering dedication, which is as strong now as it was in his youth—especially in the fields of literature, history, religion, and philosophy—so that his accumulated knowledge in the fields of religion, Shakespeare, and Samuel Johnson alone would now place him in the ranks of true scholars. He has developed close friendships and corresponded regularly with many internationally known scholars. As a teacher, his students rated him as unsurpassed. 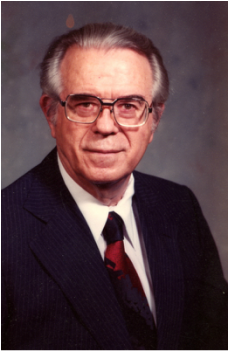 photo courtesy of LSU Shreveport Archives / 510 Noel Collection
Mr. Noel was founder and twice president of the Caddo Parish Teachers’ Association, served on the Board of Directors of the YMCA, the North Louisiana Historical Association, the Lion’s Club, and the Chamber of Commerce, but he is an individualist and doesn’t think committees get much done. He is a member of the American Association of Eighteenth Century Studies, the Renaissance Studies Association, and the Johnson Society of Louisiana, and has had continual and leadership in a Great Books Discussion Group and Study Club for nearly 23 years. Mr. Noel spends a twelve-hour working day and a vacationless year, in the mornings at his library and in the afternoons at his business. Mr. Noel has lived for many years on the north shore of Cross Lake and also owns a home on Fern Avenue in Shreveport. His wife, Ruth, whose interests are reading and gardening, has long been an active member of the Women’s Department Club.

Mr. Noel’s long and deep interest in Samuel Johnson has resulted in his writing several dozen essays, which are collectively entitled “Justice to Johnson,” and whose research work more than qualifies him as a Johnsonian scholar.